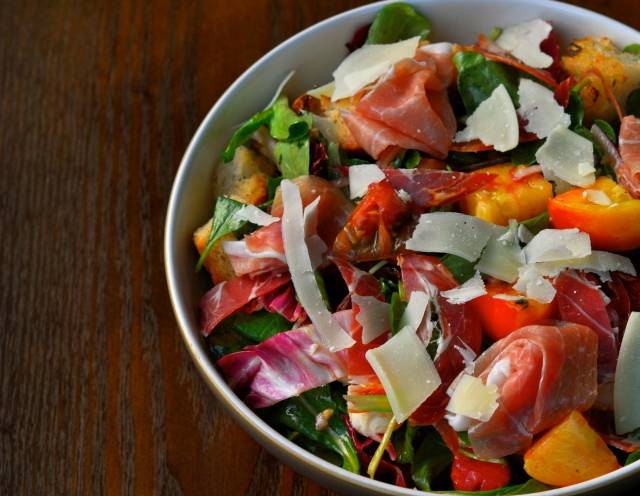 First had this salad 17 years ago and thought it was just okay. You wouldn’t think that you could mess up bread salad, but you can.  It can completely lack flavor if not prepared well.   Then I had it at the Dahlia Lounge about 9 years ago and fell head over heels.  This is my take on it, which adds some cured meat to make it an entree salad.  It’s perfect for warm summer days when you don’t want to be in the kitchen.

In a small bowl, add the vinegar and slowly whisk in the oil.  Whisk in the mustard until emulsified.
Add rest of the ingredients; salt and pepper to taste.

In a small bowl, combine tomatoes, onions and half of the vinaigrette.  Cover and let sit at room temperature while you are preparing the rest of the ingredients.

Heat an outdoor grill.  Brush bread and radicchio with olive oil.  Over medium-low heat grill the bread on both sides until nice grill marks have formed, about 60 secs. on each side.  Grill radicchio for 40 secs until just lightly seared. Remove from grill.

In a large bowl, add greens, olives, basil and mozzarella.  Cut radicchio into ½” slices and add to the bowl.  Add tomato and onion mixture, including the dressing.  Gently toss.  Add more vinaigrette if needed being careful to not overdress the salad.  Cut bread into 1″ cubes and add to the bowl.  Gently toss.  Divide between four serving dishes. Top each salad with two pieces of proscuitto, sprinkling of capocollo and parmesan.

This entry was posted in eat. Bookmark the permalink.